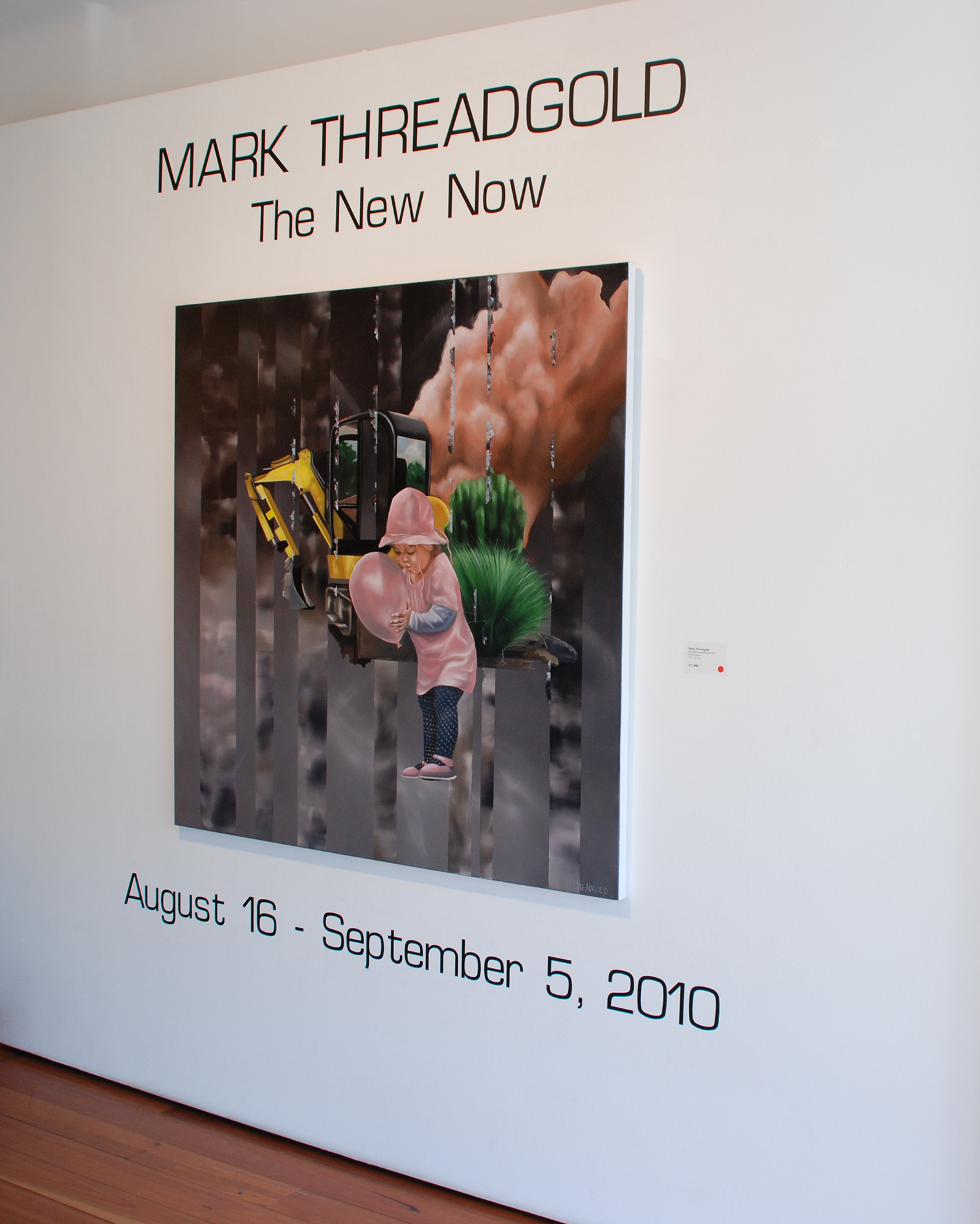 Mark Threadgold’s meticulously executed canvases glow with the luscious, milky creaminess of orchids, the glittering golden excesses of a butterflies wing, the perfect smoothness of a child’s cheek.

And then there are the sharks.

Threadgold’s paintings resound with the battle between beauty and destruction, innocence and decay, 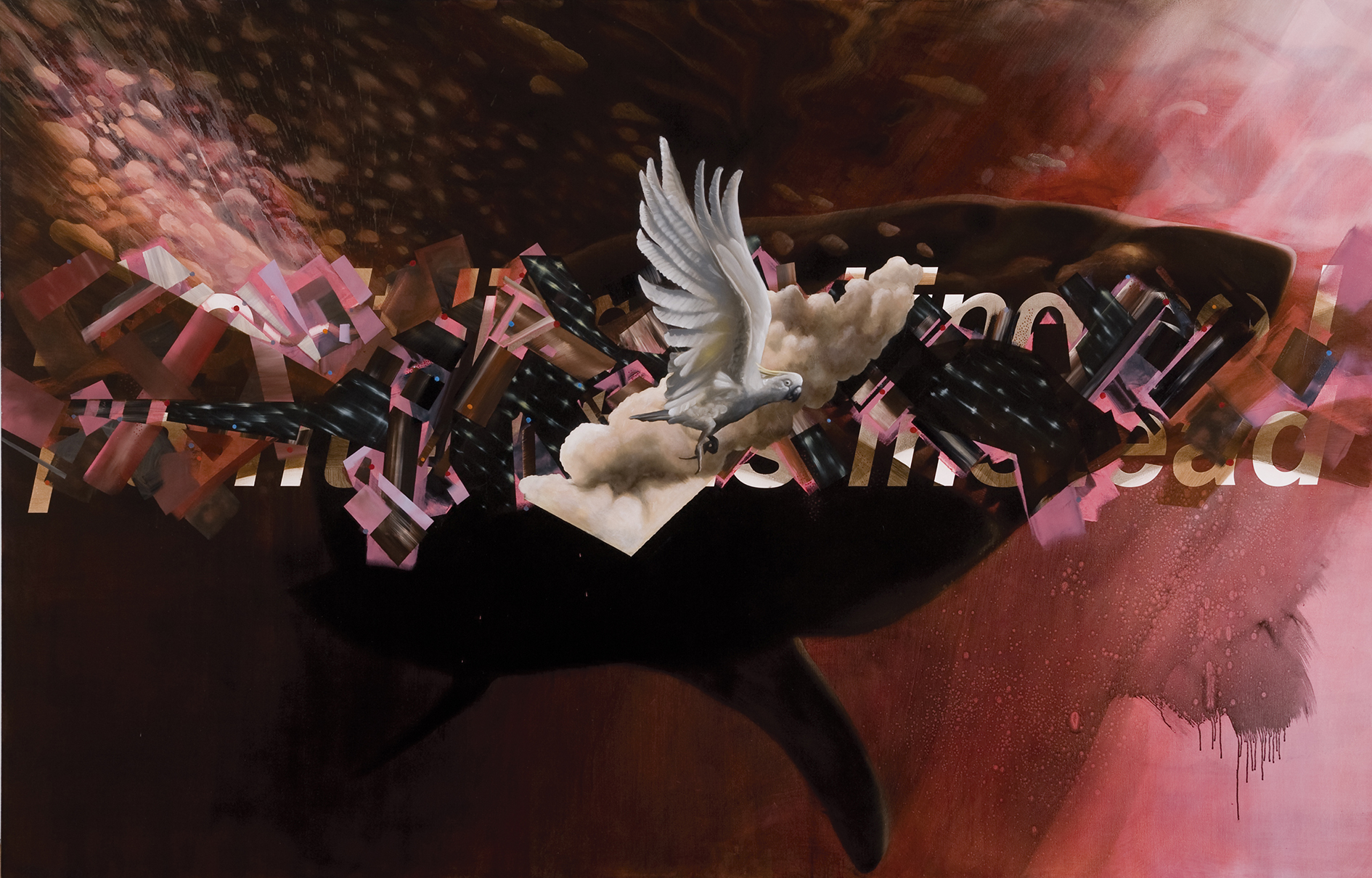 And like any father he relishes the innocence of youth and he worries over the vulnerability of childhood. It is probably safe to say he also worries over the toxic future mankind seems intent upon creating. Thus a small child, dressed in pink and clutching a party balloon stands as a beacon of hope against a background of belching fumes and mechanized destruction. 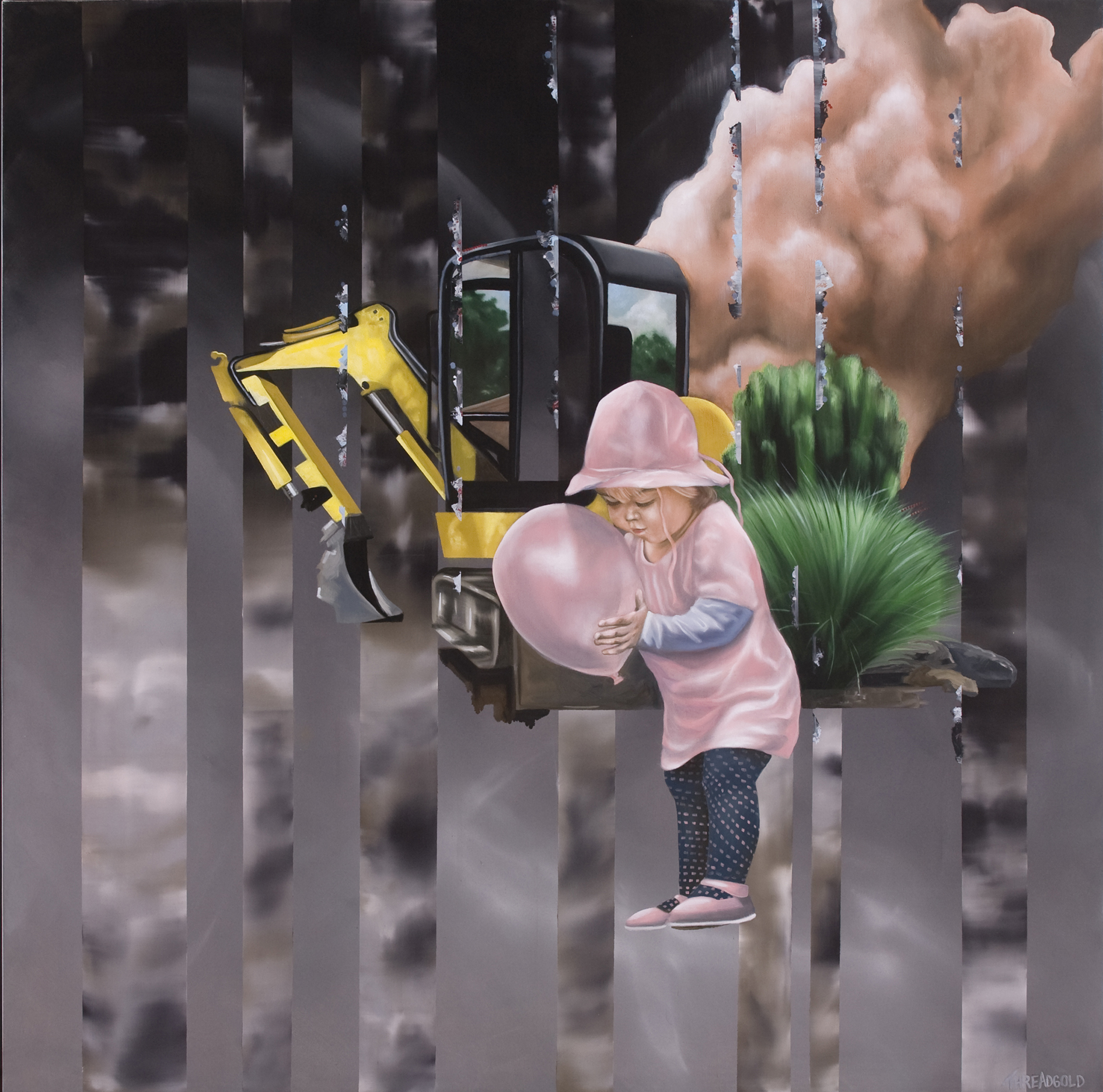 But has Threadgold encased his children, his orchids, his bulbous fruits and his butterflies in smoked glass chambers for more altruistic reasons? Apocalypse seems to be the pop-culture talisman in the new millennium – whether it be novels, films or visual arts – the end of the world is all too common fodder. Unfortunately it is not confined to fictions – the nightly news with earthquakes in Asia and oil spills in Louisiana hints at nightly Armageddon. In Australia most recently it was fire – blistering winds churning fire bombs through bush valleys, the skies turning to bloodied darkness at midday. Threadgold captures the inferno from an eerily deserted road, as though humanity had already passed through on an epic trek for survival. 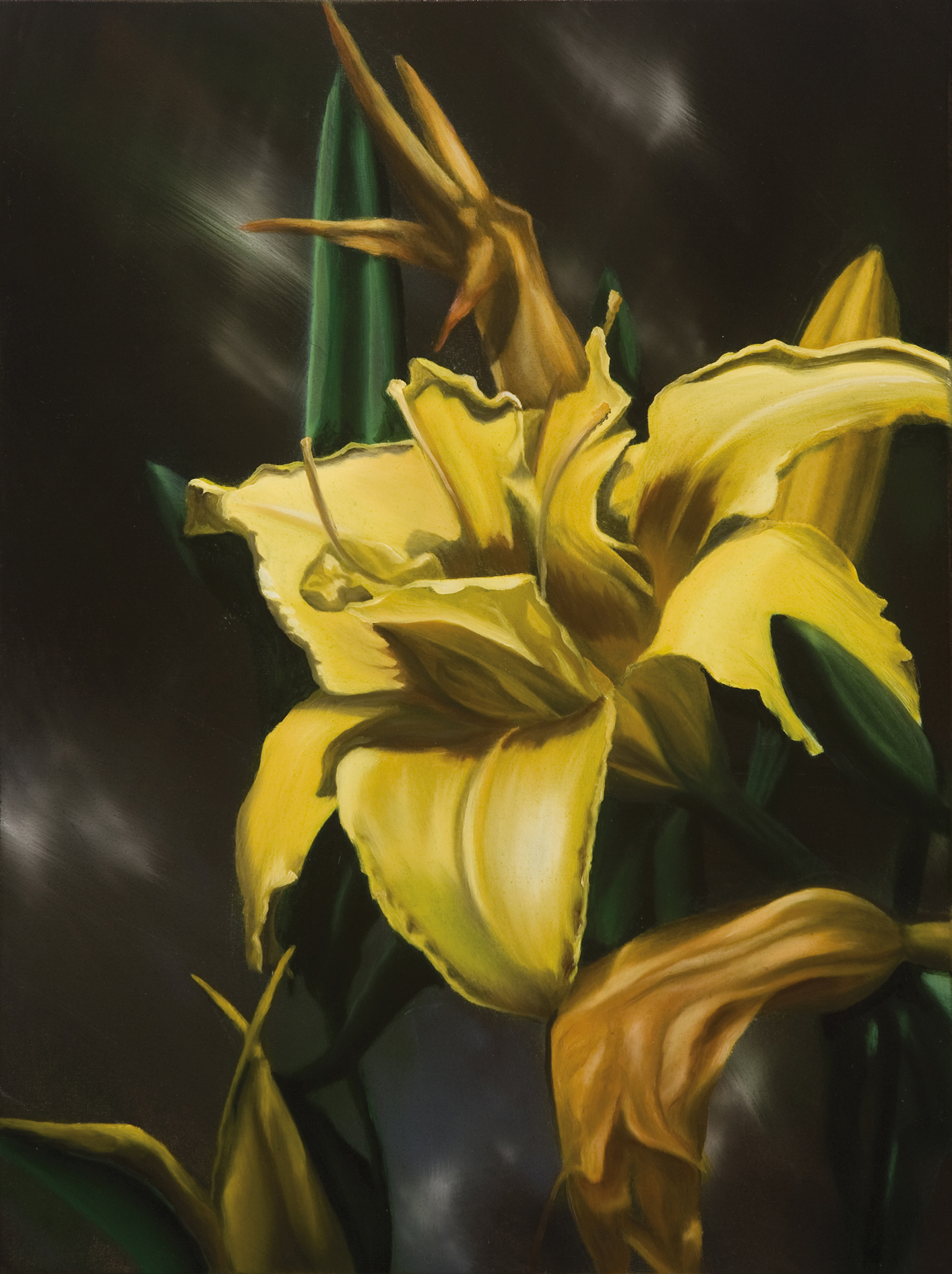 But Threadgold, inspired by the stories of survivors of the fires, has found a seam of oxygen in the smoke. In psychology, Post Traumatic Growth is a condition where a small percentage of people who suffer trauma in their lives recover with a profound sense of optimism and improvement to their lives. This notion of a disaster leading to a positive outcome has become the basis of Threadgold’s new work; the transition from his previous tendency towards undertones of melancholia, to his new work where he has discovered an optimistic escape from the dark days. 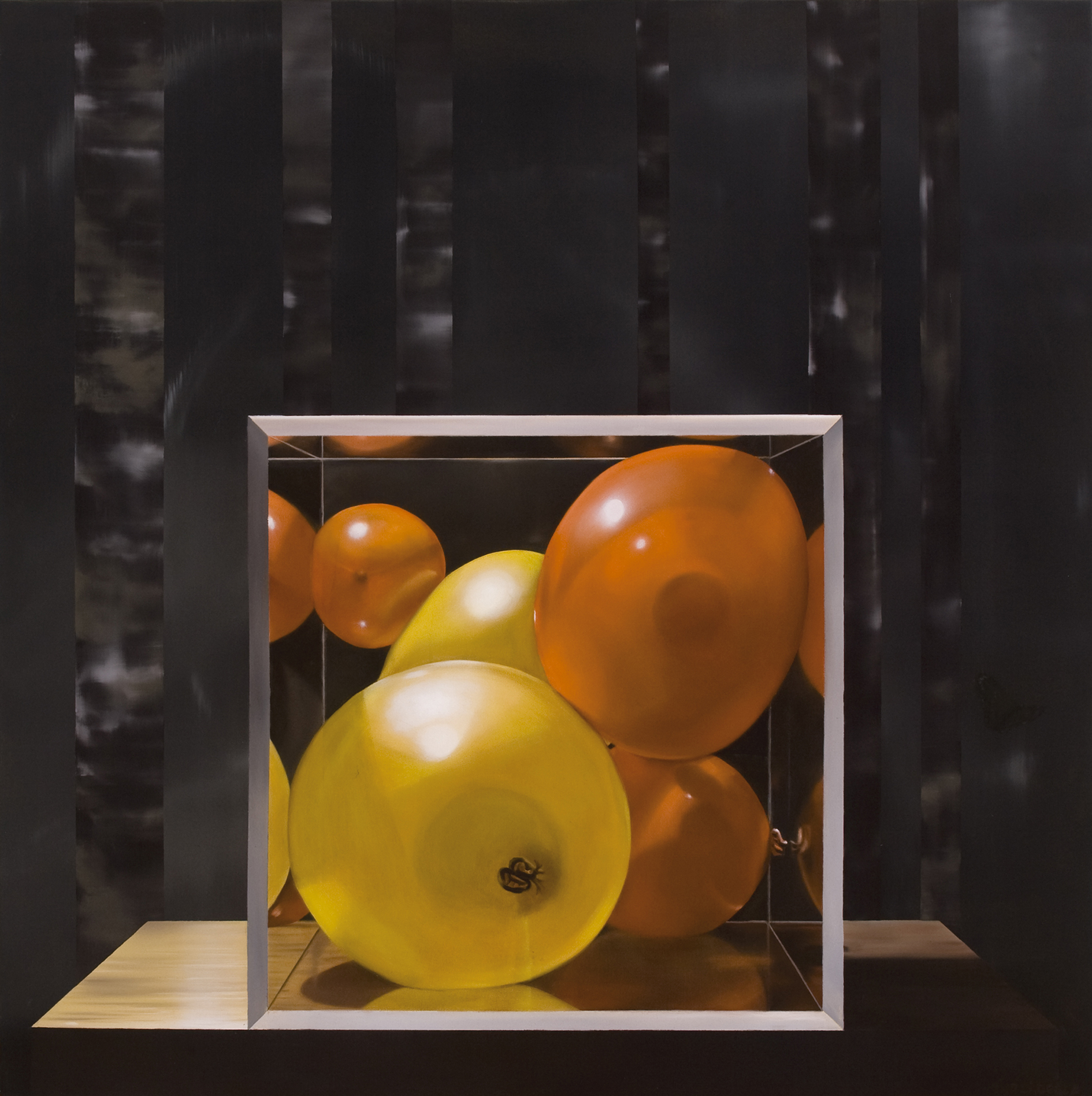 With his fascination with the extremes of light and darkness, Threadgold’s elite core of inspiring predecessors comes as little surprise. He cites the knowing humour of Richard Prince, Gerhard Richter’s willingness to push the medium of paint. Caravaggio he cites “for his murderous competitiveness and use of chiaroscuro.” Unsurprisingly Dutch Still Life painting is there with its use of shadow and sulpherous light.

And then there are the sharks. 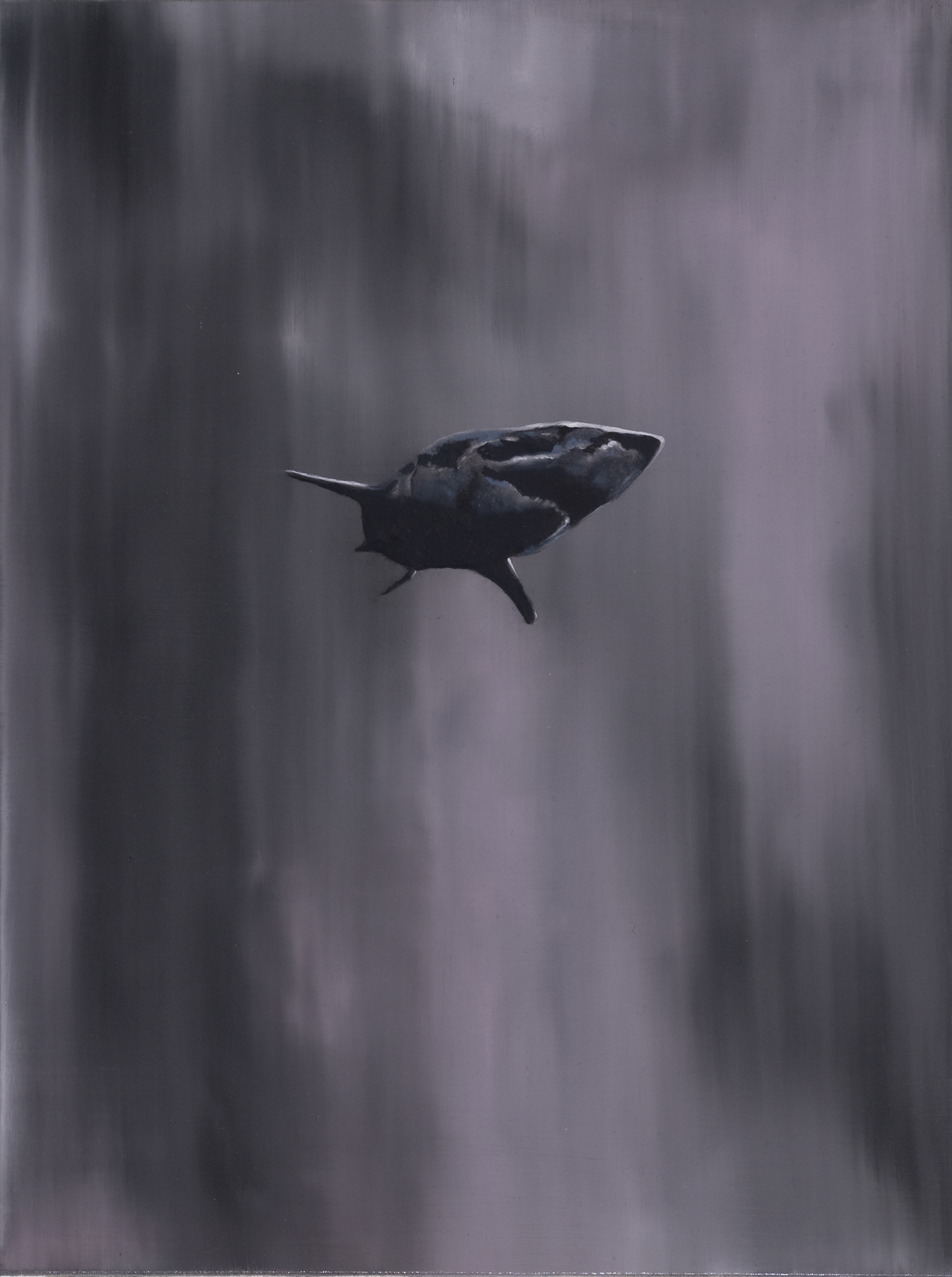 Unsurprisingly Damien Hirst also makes it onto Threadgold’s list. Hirst managed to cause considerable angst when he presented The Physical Impossibility of Death in the Mind of Something Living in 1991, a massive tiger shark immersed in a glass tank of formaldehyde. Threadgold has long been fascinated with placing his subjects in what seem to be geometric preserving jars, but when it comes to his shark it seems to be the very edge of the painting that keeps the monster at bay, and then only just.

For Threadgold the shark represents mystery. It is a symbol of fear, but one that should be overcome with rational thinking. Our perception of the shark has changed over time. There’s not a great deal known about the Great White Shark still and the more we discover, the less of a single minded man-eater it becomes. 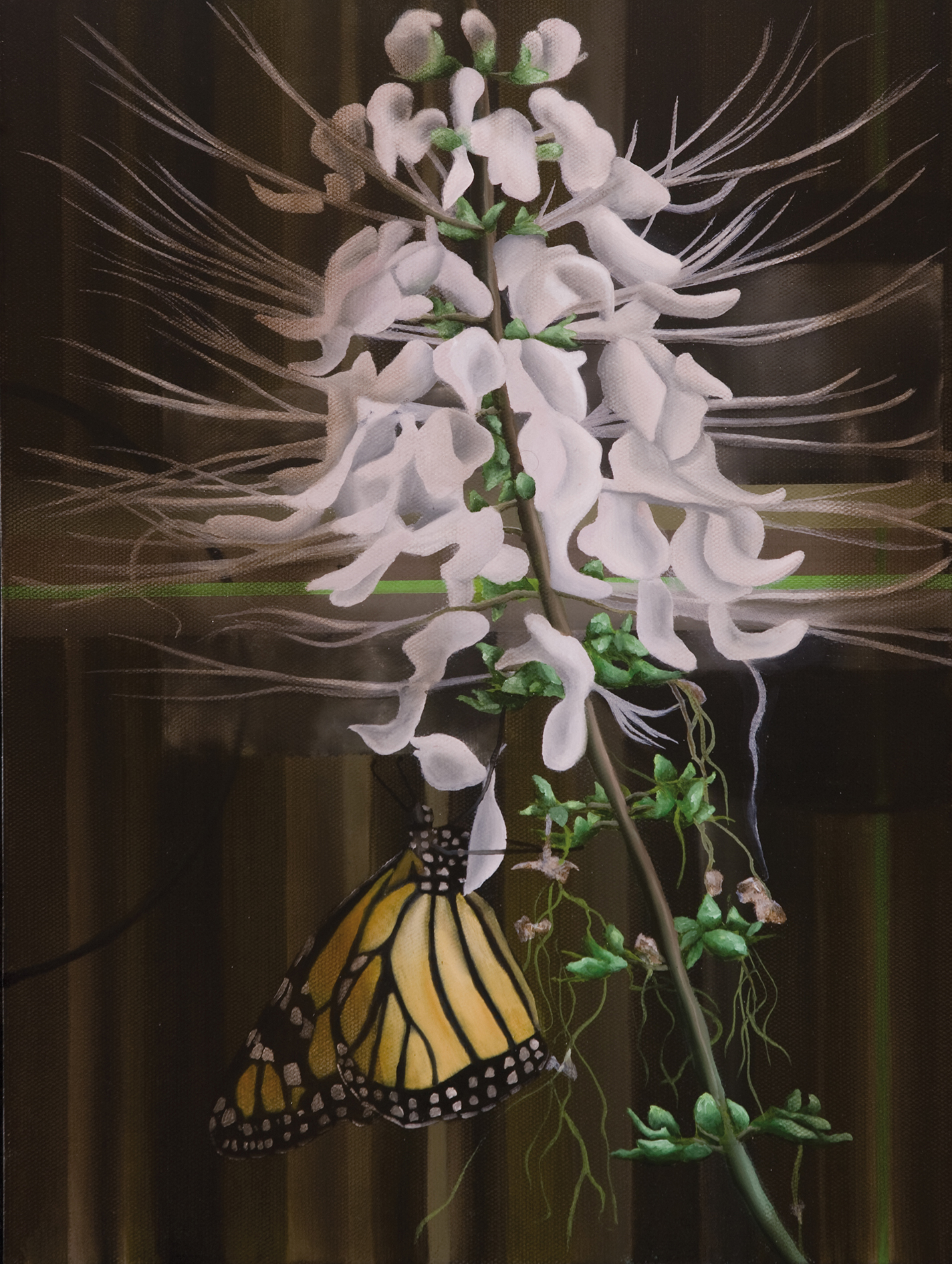 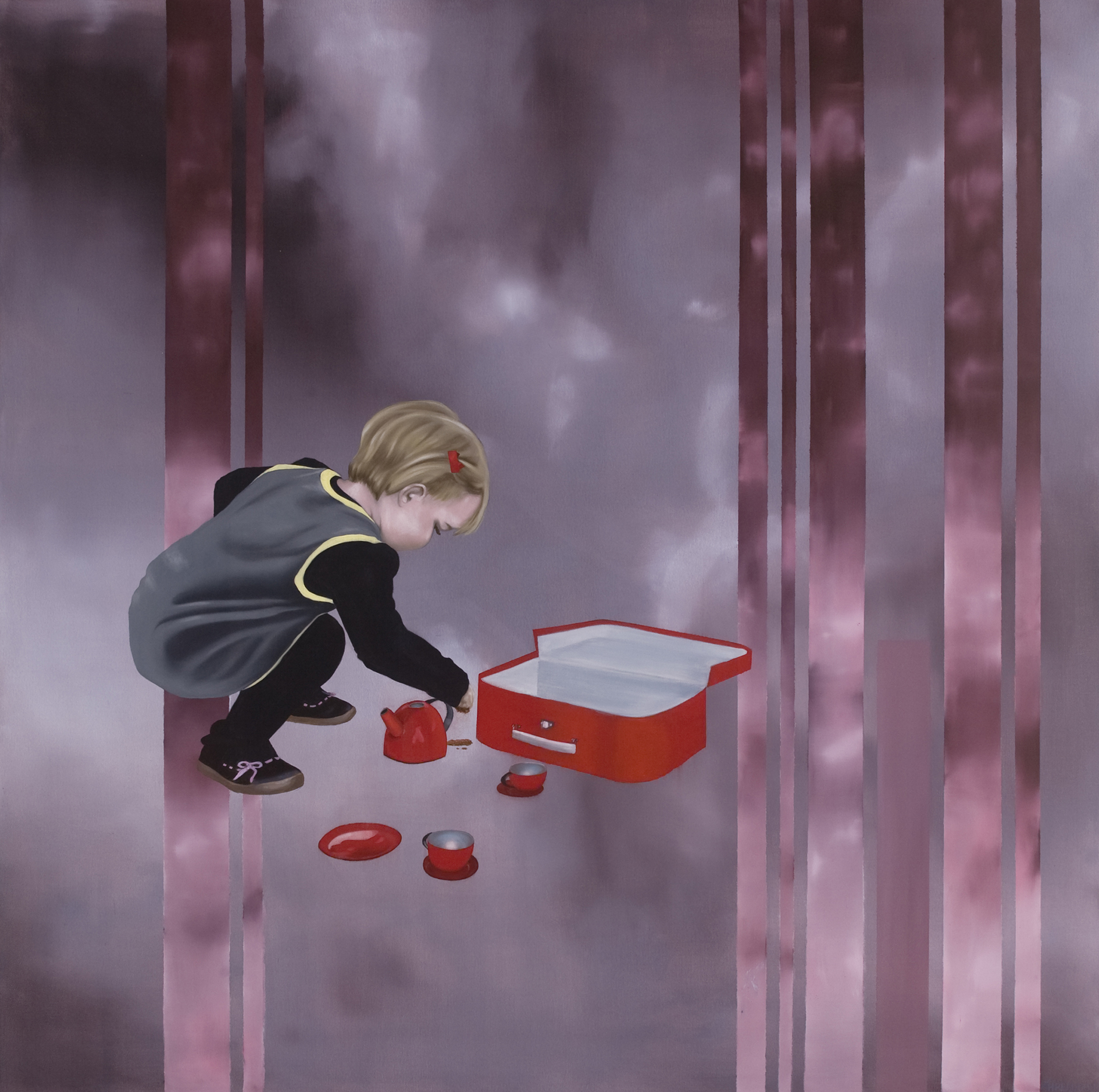 Threadgold’s structures, what he has dubbed his “containment line” have something in common with the giant greenhouse-like geodesic domes floating outside the orbit of Saturn in the 1972 film Silent Running. The domes keep secure the last remaining forests in the hope of returning them to an apparently barren Earth in order to reforest the planet, but such a plan becomes economically unfeasible and the resident botanist, played by Bruce Dern, is ordered to destroy the forests. He refuses and manages to jettison one dome to safety. 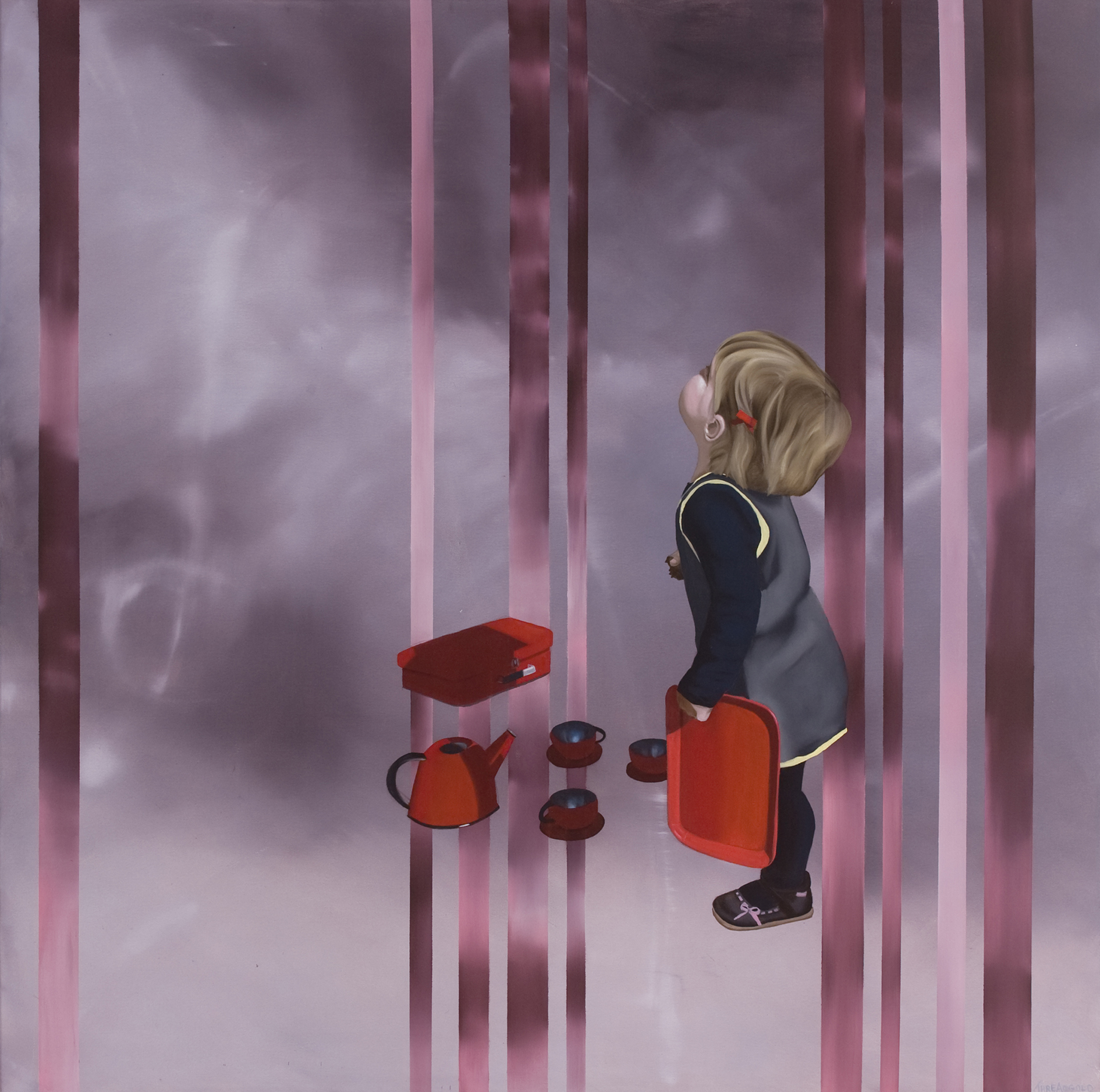 Threadgold’s orchids, butterflies and even children become akin to museum pieces – they become precious in their transitory beauty, buffeted by the outside storms of ‘progress’ and its attendant environmental Armageddon. If, in Chaos Theory, the flapping of a butterfly’s wings can cause hurricanes, they are as powerful in their way as the Great White Pointer, but, Threadgold seems to be telling us, there is room aplenty for all, the massive and the delicate, as long as all are treated with equality and respect. 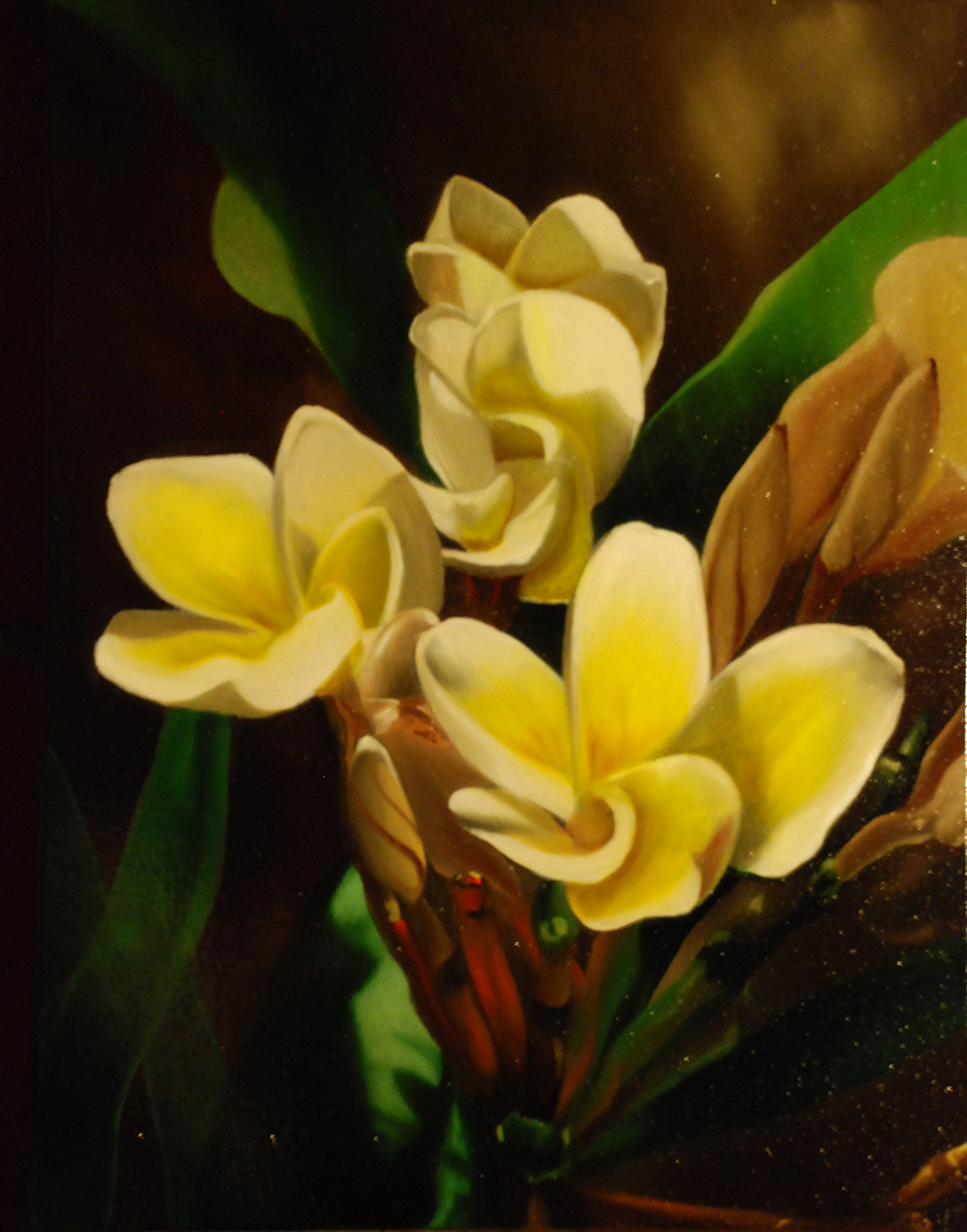